skip to main | skip to sidebar
Paul Boyton
(often misspelled Boynton) (b. June 29, 1848 in Ratthangan, Kildare County, Ireland — April 19, 1924), known as the Fearless Frogman, was a showman and adventurer some credit as having spurred worldwide interest in water sports as a hobby, particularly open-water swimming. Boyton, whose birthplace is variously listed as Dublin or Pittsburgh, Pennsylvania, is best known for his water stunts that captivated the world, including crossing the English Channel in a novel rubber suit that functioned similarly to a kayak. 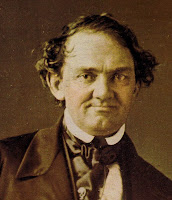 Act Underneath the Big Top.
One of the most unique ads fo
r a Barnum act was this odd but compelling "bird's eye view of a twisting river with adventurer Captain Paul Boyton popping up at different points.
Boyton spent years taming rivers,
waterfalls, whirlpools - anything else that   was wet and dangerous.
He navigated the Mississippi when it was filled with grinding ice. Abroard, he had been attacked by sharks in the Straits of Messina.
He conquered the Tamaes, Rhine, the Danube, the Tiber, the Arno. 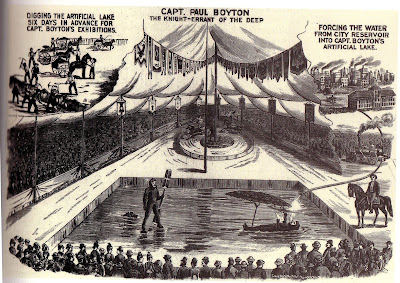 All this in preperation for his tour with the great Barnum and London United Monster  Shows, for which  Barnum admitted paying Boyton a "princely salary" for an undertaking that would "severely tax even our enormous resources," the daily construction of a miniature lake (right) in which the Captain could revel in his rubber suit.

Posted by Colleen Sullivan at 5:11 PM

Labels: The Greatest Show On Earth.http://3.bp.blogspot.com/_UY5R8eUev38/S1ZBEzf_-oI/AAAAAAAAAKE/-b6kNhjSEjc/s1600-h/boytoncircu+LAKE.jpg

My Grandfather was a cousin of Captain Paul Boyton I would like to know a bit more about him.

I have a circus poster I believe from 1887. Barnum & London that highlights Captain Paul Boyton who saved 94 human lives and is performing aquatic wonders in a specially designed artificial lake. I shows him in his rubber "kayak style" suit. The perfomance was in Frederick, Md. I am wondering the value, if not much I will just hang it in my living room. Have searched the internet and can't find this specific poster. Any suggestions

Do you still have this poster? I believe I know the one you're referring to and would be happy to look at a picture of it if you'd like and let you know. You can email me a snapshot at davidasulliv1@gmail.com. Thanks.

Colleen Sullivan
I am the Great Niece of Captain Paul Boyton, after the death of my older brother in California, I came across an old New York Irish Times with an article on Michael Boyton, my Great Grandfather, that he had some how aquired. While researching the article I found Captain Paul, the book will tell you the story of his amazing journeys. Born in South Africa, and brought up in Rhodesia. Centeral Africa I moved to the United States at the end of 1983. After giving the new Zimbabwe a chance, but within three years the writing was on the wall and I realized my two teenage children and I had no future there.

To Michel Lopez, Historian at Le Manns University Paris.
For his assistance and sharing all his research with me, plus all the people who also helped Michael with his research.
Stan Barker and The 1800's Group.
All your the research that you shared with me and support.
Geraldine Dudley, Caps Grand daughter for the loan of photos and sharing the stories passed down through the family

The Story Begins on the Allegheny PA. July 1858:

The Allegheny PA: July 1858
First attempt at navigation: The Grey Eagle.
Voyage on a coal fleet. The Red Lion, New Orleans and slave sale.
Rescued little Thomas Mc Caffery from drowning.
College Days: Bruce's dam, swimming with snakes. Squirrels.
USA Navy April 15th 1864: Brooklyn Ship Yard NY. USA Steamer, Hydrangea with
Captain W Rogers. The James River past Malvern Hill. His last engagement was the memorable assault on Fort Fisher, at the end of the war he mustered out a Yeoman.
Submarine and Diving in the West Indies: Aboard the bark the Reindeer heading for Barbadoes. Captain Balbo, diving for treasure.
June 2nd 1867:  Cape May selling coral and ocean treasure. Life saving and competing with the native boatmen. Fall fire destroys his business in Cape May.
He left with the expression: If you wish to make an enemy in life "Just save his life or lend him money."    December 1869 his father passed away.  Became a Mexican Revolutionist.
January 1870: Paul embarked on the New York headed for Liverpool then onto Havre as an American Volunteer a Franc-Tireur in the Prussian-War. Earning 30c a day. Failed Cuban expedition.
*** Submarine diver: The Diamond Fields of South Africa.  A floating hell and the escape at Malaga.
*** The rubber suit (dress): Overboard from the Steamer Queen.  Landing on the Coast of Ireland.
*** Arriving in Queenstown: Appearing for Queen Victoria.
*** Crossing The English Channel. Pigeon dispatches and landing in England.
*** Germany: Voyage down The Rhine. Through the Lurlei Wirlpool. The press boat with James Creelman.
*** The Mississippi: Short run with the Funny Negro Pilot. Down the Danube and the Po.
Attacked by fever. Lucretia Borgia's castle.
*** Voyage on the Arno from Florence to Pisa: Narrow escape over the falls.
Down the Tiber to Rome.  Across the bay of Naples.Knited by King Victor Emmanuel.
*** The Straights of Messina: Attacked by sharks. Whirlpools of Scylla and Charybdis.
Lake Tasimene.
*** Quick voyage down the Rhone: Smuggler's chain. Gambling Palace of Monte Carlo.
Down the Loire. Stuck in quick sand.
*** Mysterious Targus: Toledo to Lisbon. The great falls and dark canyons.
Ancient Moorish masonry. Villianous Brigands.
*** Europe to Africa: Straits of Gibraltar. Preparing for sharks. Currents and heavy over falls. Landing at Tangier.
*** Paddling in the ice floes on the Allegheny: Down the Ohio to Cairo.
Queer characters. On the Mississippi again. Starange sights and sounds. The comical darkies.
Alligators and the dead man in a boat.
*** Voyage on the Merrimac: Peculiar people. Rough trip down the Connecticut. Lost in a snow storm. A winter in Florida.
*** South America: Officer in Peruvian Service. Placing Torpedoes. Caverns of the sea- Sea Children. Inca Tombs. Escape from prison. Rescue from a lonely island.
*** Upper Mississippi: German doctor. Negro boatman. Arrival in Cairo. Hunting and fishing.
*** The Longest Voyage: Down the Yellowstone and Missouri. The Western Wilds.
Indian Tepees. Chief Sittingbull. Caving banks, snags and mud sucks. Rustler's camp.
*** Hunting in the Southern Bayous: Voyage down the Arkansaw. Haytien insurgents. Down the Sacramento. A night on Great Salt Lake. Down the Hudson.
March 12th 1889. Columbia River, Astoria, Seaside and Tilamok catching seals. Gone to Davey Jone's Locker on the Washington coast.
*** Paul retires: The Remark made by Cap Paul at the end of the book note taking: "Well thank goodness, we are through, and now I can get out for a little fresh air again."
During the summer he was almost in the water daily with his company of aquatic experts.
The winters were spent inventing and perfecting new devices for water amusement parks.
Cap Paul went on to open the very first amusement park in Coney Island with sea lions, and followed up with Shoot The Schutes. There are several books and info available on Coney Island. 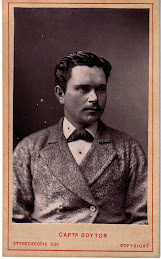 On the morning of April 15th, 1864, young Boyton presented himself at the Brooklyn Navy Yard, and was enrolled in the United States Navy as a sailor before the mast. After a few weeks of drilling he was transferred to the United States Steamer, Hydrangea, Captain W. Rogers in command, Paul was now just  fifteenth years old.
He had no difficulty in passing the scrutiny of enlisting officers. With a powerful build and very muscular, his outdoor life in the woods and on rivers made him look older than he really was.
The Hydrangea was ordered to Fortress Monroe, and Paul received his baptism of fire while the steamer was running up the James River past Malvern Hill, where a confederate battery was stationed. Much has been written about the war, and as this is simply a story of adventure, it will be left to better writers to record the war history many of whom have already described scenes enacted in that vicinity during the war of 1864.
The last engagement Paul was in, was the memorable assault on Fort Fisher. When the war ended, he mustered out.
At that time he held the position of yeoman.

PHOTOS FROM MY COLLECTION

Below are several original portrait photos that I have been lucky enough to acquire from the 1800' s of Captain Paul in his Rubber Suit. 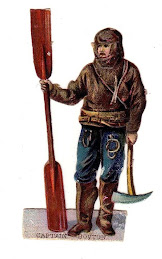 Have not as yet been able to confirm which exploration Cap was involved in. 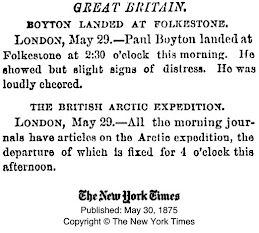 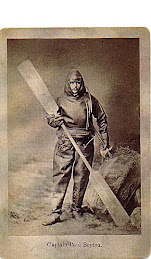 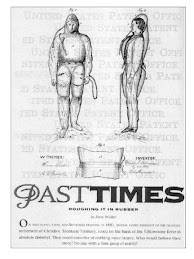 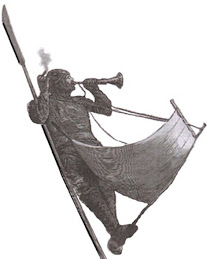 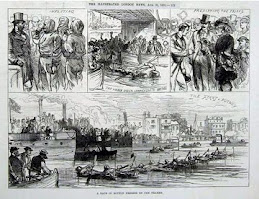 Starting To Cross The English Channel

May 1875 Second Attempt Was Sucessful

On Their Way To The Finish

They Had To Abandon This Attempt To A Storm Just Six Miles From Shore. Pg 109

Map Of The Channel Crossing 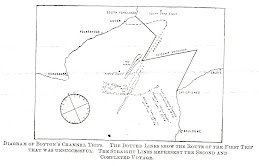 Showing the route of the swim. 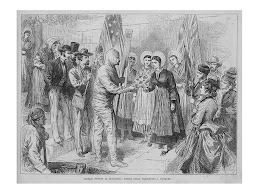 Paul was very uncomfortable with all the attention.

The ladies swarmed him while the European Gentry showered him with invitations to banquets, all clamering for his presence at their functions.. 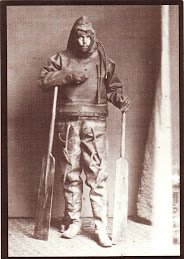 ROME: The General And The Carpenter.

Boyton was just in time for the great Roman Carnival and had the pleasure, if such it may be called, of witnessing the spectacle of barbaric behavior. This was a cruel and dangerous sport, a horse race along the Corso, the principal thoroughfare in Rome, which is a narrow winding street.  The race is between five or six thoroughbred
horses, almost wild and very vicious. They are turned loose in the street without bridles or any other harness, only a surcingle, from the sides of which hung like tassels, steel balls with sharp needle like points protruding from them, that serves to prick the animals to a frenzy of speed. The streets were lined with people and it took the guards all they have, to keep them back and out of danger.  As the canon is fired, the terrified animals dash madly down the street with the wicked steel balls swinging in the air. People and horses are always killed at this barbaric Roman Carnival, the carnage and cruelty of horses has since been outlawed, in Italy and I believe all of Europe.
While in the ancient city Paul was determined to make a voyage down the Tiber.  Going up the river as far as he possibly could get, to Orte, measuring the distance from Rome to Orte, about ninety miles by river.  The news of him travelling up the river reached Orte before he did, and another reception awaited his arrival, he was royally

Torpedoing The Man of War 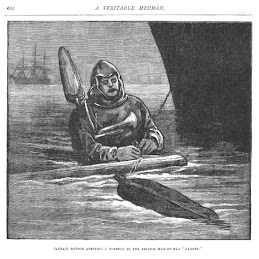 Paul filled Rubber Bags with dynamite to create these Torpedos.

Fighting Off A Dogfish!